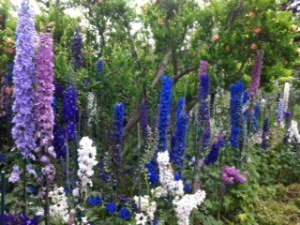 Guadalupe Rios has lived in Montecito Heights for almost 20 years but had never been to the Huntington Library. She had heard of it, loosely, but hadn’t really known what it was. Neither had any of her classmates in the English class she takes at the elementary school where her son is a student. This cluster of Latina moms, aunts and grandmothers comes four mornings a week to improve their English. They squeeze classes into a busy schedule that includes housework, doctor appointments, parent-teacher conferences and, for some, part-time work. They love beautiful things and soak up education like thirsty flowers, but had no idea that an extraordinary world of books, paintings and gardens existed less than eight miles away.

Then a question about religion turned into a lecture on history, and suddenly their teacher, Ms. Brown, was at the computer, pulling up pictures of the Guttenberg Bible…and the Huntington. The women clustered around the monitor in excitement, and a field trip was born.

The Huntington Library, Art Collections and Botanical Gardens is one of LA’s cultural treasures. It is an educational and research facility located near Pasadena, in San Marino. In addition to rare books and documents, 18th and 19th century paintings and early 20th century American artists, it offers 120 acres of botanical gardens divided into more than a dozen different themes.

Tickets were easy. The first Thursday of each month is free at the Huntington, with advance reservations. The problem was transportation. Few of the women drive, and Brown’s little Del Sol only seats two.

So, on the first Thursday of May, they set out from school – a small parade of women with backpacks, two kids in hand and one in a stroller.

They walked along the edge of Montecito Park, across the overpass to Sycamore Park and up to the Gold Line platform, which sits just below the Southwest Museum. Two of the students had never been on the Metro either, but their friends helped them figure out the ticket machine. It was a cool gray day, perfect for walking. The train came quickly, and it was all aboard.

There is something magical about trains. There is an intimacy in the rocking motion, and the passing scenery offers a moving slide show into other lives. As the cars weaved their way from station to station, they passed stands of palm trees and cypress, red rushes of bougainvillea, small houses and industrial centers, parts of the city some had never seen. In twenty minutes, they were at the Allen Streetstation. A mile and a half later, they reached the Huntington.

First stop was the Library. The illuminated manuscripts and the Gutenberg Bible were an instant draw. So were the paintings in the museum. “Look at the fabric!” someone exclaimed. “It looks so real!”

But it was in the gardens that the cameras started popping. The rose garden was in full bloom with flowers called Cinnamon Spice and Marilyn Monroe. The curved bridge in the Japanese garden drew sighs of delight. And a growing refrain stirred: “There isn’t time to see everything. We have to come back!”

Brown was delighted. “This was my goal,” she explained. “Now they know it’s here. That it’s affordable and easy. We did the whole trip for a bag lunch and a $3 fare.”

The group was tired on the long walk back to the station, but the images stayed with them. “I like the library,” said Maria Santiago. “I need to spend more time there.”

“My favorite was the gardens,” added Irma Mero. “The variety of flowers, of colors…”

But it was Guadalupe who seemed to speak for all of them when she said, “I liked everything. I never imagined that something this beautiful was so close to my house.”

Please note that any ads you see are placed here by WordPress.com. I gain no income from any advertising displayed.
Loading Comments...
%d bloggers like this: